Children that are 15 years or younger can be promoted in the following belt order: 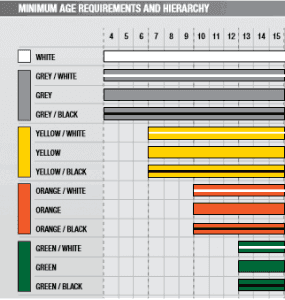 Each belt contains 5 levels, first the belt followed by four stripes. These stripes may be achieved through time, behaviour, Jiu Jitsu knowledge, and competition performance.

The white belt is considered the beginner level.

When a child turns 16, they must move to the adult system of belts. White belts remain at white belts. Grey, yellow or orange belts can turn to white or blue belt at the coach’s decision. Green belt can turn to white, blue or purple belt according to the coach’s decision. Adults may be promoted through the following order: white, blue, purple, brown and black. Each belt requires a minimum time spent on the belt. You need to spend at least 2 years as a blue belt, 1.5 years as a purple and one year as a brown belt to get promoted.

Why is it important to have a rank system for children?

It’s very important to have a ranking system because children can be demotivated by the struggles of learning and getting better in Jiu Jitsu. They may not be able to see progress in technique, and enjoying the progress as adults do, because they don’t have the way of thinking that an adult BJJ practitioner has. For this reason, the belt promotions make sense to keep the children motivated and let them see their progress during their Jiu Jitsu journey. Compared to adults, children tend to be more motivated by being promoted more often and feeling the drive to train frequently.

Also, there is a big point of learning about hierarchy. The belt system for children shows a strict hierarchy which they wouldn’t necessarily learn in other places. Also you can easily identify the skill level of a child just by looking at their belt.

Summed up it has been a discussion topic about whether a belt system is beneficial or disadvantageous. Considering that the belt system for children in Jiu Jitsu can actually help to educate and keep the children motivated should be a good argument for the procedure of promoting kids.

A child that starts part-way through the term will need to train for a minimum time of 5 weeks before the first stripe for positive reinforcement can be received. 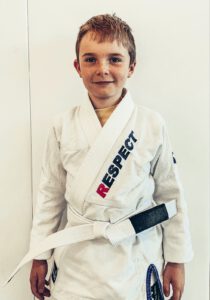